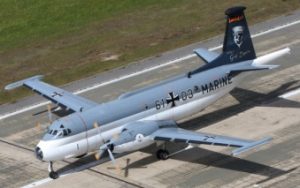 Detoxication and displacement of the equipment was done by the maintenance team of MFG 3. After that, the wings and vertical tail were taken off. The extraction of high quality parts and the disassembling of the turboprops took place in the disassembling hall. 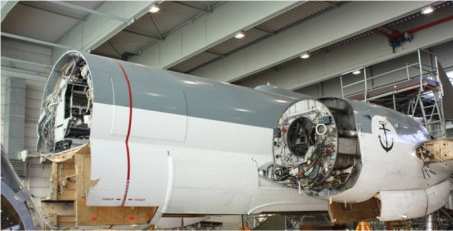 Certain parts of the machine were cut out with a cutting machine. The dismantled cockpit was transported as a whole, and together with other diverse components became part of the marine aviation teaching collection Nordholz.

Transportation from the dismantling hall to Bucht 14 of the marine airport in Nordholz was done by MFG3. After arriving in the early morning hours, Sebastian Jeanvré´s project team from Keske Entsorgung GmbH set up the final disassembling. 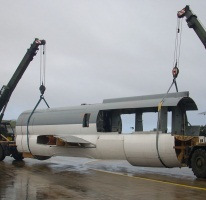 This included the positioning of the means of transportation with the containers and the preparation of the upcoming dismantling by the mobile digger and scrap shear.

The grinding work started with the upper aircraft body section, was followed by the lower sections and finished with grinding the rear.

After exchanging the digger´s cutter with a clamshell the Bréguet Atlantic 63+03 composites reduced to small pieces were loaded into containers. In the late afternoon, loading was finished and the composites were transported to Keske Entsorgung GmbH for further processing into sorted secondary raw material. 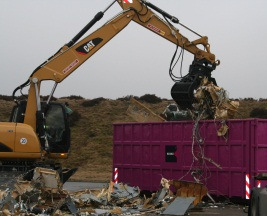